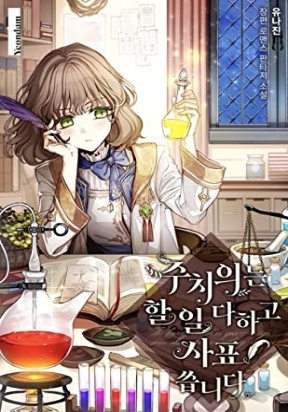 Worthless Regression Average 3 / 5 out of 38

Doctor Resignation is a Manga/Manhwa/Manhua in (English/Raw) language, Drama series, english chapters have been translated and you can read them here. You are reading chapters on ManhwaZ fastest updating comic site. The Summary is

When the duke, who was in poor condition, suddenly died, the land fell into the hands of the rebels. In a short time, the rebellion was suppressed by the royal family, but… The point is that I, Lise Estelle, will be hanged for treason. “It’s not fair!” I’m simply the best doctor in the area. If that’s the case, I’ll become the duke’s doctor so there’s no rebellion, and I’ll make the duke’s heir healthy! “No one cares about you as much as I do. Therefore, you must definitely listen to me.” “Run! You need to strengthen your immunity!” “Eat this grass. Don’t say anything more and just eat.” Um…But why is he so tall? Did he have a good physique in the first place? Well, anyway, I’m glad he was raised well, so I can resign now… “Resignation?” His eyes narrowed and the surroundings began to give off a cold air. “Lise, you said you were the only one who cared about me.” Before I knew it, he walked over and sat in front of me. Whispering in my ear as if deliberately seducing me. “Let me go? I’m not stupid, Lise.” Unlike my previous life, he is now healthy and even his personality has changed.