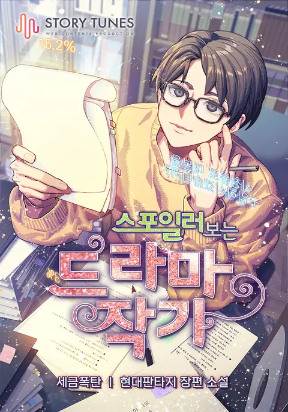 Drama Writer Who Reads Spoilers is a Manga/Manhwa/Manhua in (English/Raw) language, DRAMA series, english chapters have been translated and you can read them here. You are reading chapters on ManhwaZ fastest updating comic site. The Summary is

6th year drama assistant writer Jang Yeon-jae. He desperately wanted and tried, but ahead of his debut, his teacher the main writer Kim Tae-jin stole his script. "sir! How could you do this! That's my script!” “Yeon-jae. It is true that I was a little influenced by your ideas. But that is definitely my work.” After leaving the assistant writer job out of anger, he looked for a way to knock Kim Tae-jin down, but there seemed to be no hope. But at that moment... A miracle happened. [You can purchase 200 characters of the script with a rating of 0.1%.] [When broadcasting with this script, the expected average rating is 15.2%.] [Do you want to buy?] [Yes / No] 'On-air shooter' required! Assistant writer Jang Yeon-jae's high-rating drama, (Drama Writer Who Reads Spoilers)