ELDEN RING: The Road to the Erdtree 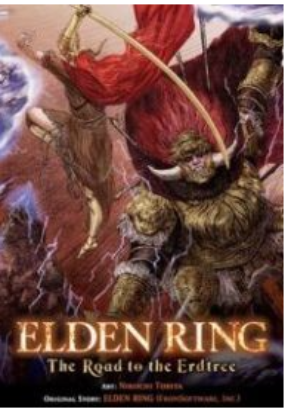 ELDEN RING: The Road to the Erdtree is a Manga/Manhwa/Manhua in (English/Raw) language, Action series, english chapters have been translated and you can read them here. You are reading chapters on ManhwaZ fastest updating comic site. The Summary is

ELDEN RING: The Road to the Erdtre manga, Elden Ring: Ougonju e no Michi , ELDEN RING 黄金樹への道 Aseo, a poor, Tarnished wretch, finds himself cast out into Limgrave—naked, penniless, hopeless, and maidenless. His only hope in his harsh, unforgiving new home is a mysterious woman named Melina. She urges him to follow the guidance of grace to the Erdtree that looms over the Lands Between. But it won’t be an easy road; a cast of colorful characters awaits Aseo along the way—Patches the Untethered, Blaidd the Half-Wolf, Margit the Fell Omen, Godrick the Grafted, and of course, Ranni the Witch…With little but a loincloth between Aseo and certain death, he strikes out for the first stop on his quest: Stormveil Castle. Will he make it there, or will his journey end before it even begins?