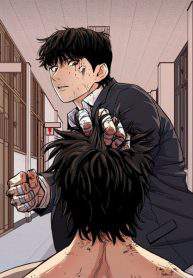 Lim Sejun who has a big physique, is fat and likes to eat. He has high self esteem and a firm personality and doesn’t care about being teased fat. He has only one friend, Seo Hajin. Since they were young, she has been learning jiu-jitsu to protect Sejun. One day, Hajin saw that Sejun had trouble with one of his classmates and destroyed him But one night Hajin was assaulted and found severely injured and serious psychological trauma Sejun reported it to the police but when there is little to no progress in the investigation he couldn’t control his anger and goes to find the criminal himself but was defeated by a bully who learned jiu-jitsu and finds nothing. Then he learns jiu-jitsu from ‘Jason’ who had saved him. After 3 months of learning, losing weight and knocking down bullies, he discovers that a veiled organisation is involved and wants to destroy it. A school action drama depicting individual revenge.