Hiroyuki: Invincible Pundit in Another World 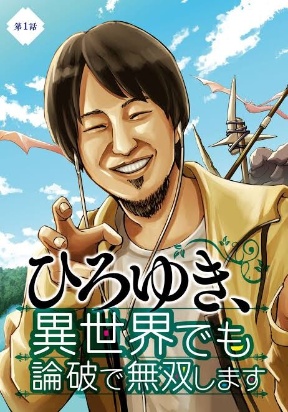 Worthless Regression Average 2 / 5 out of 11

That Hiroyuki is also breaking down arguments in the other world!

Hiroyuki: Invincible Pundit in Another World is a Manga/Manhwa/Manhua in (English/Raw) language, SUGGESTIVE series, english chapters have been translated and you can read them here. You are reading chapters on ManhwaZ fastest updating comic site. The Summary is

After being transferred to another world, Hiroyuki defeats his opponents, whether they are humans or demons, and lives at his own pace, just as he does in the present world. In this world of swords and magic, Hiroyuki's warriors continue! Translation note: Hiroyuki Nishimura is a self-help author and television personality who is best known for founding 2channel, one of Japan’s big anonymous message boards. You may know of its western equivalent 4chan, which he bought in 2015.