I Can’t Be This Stupid 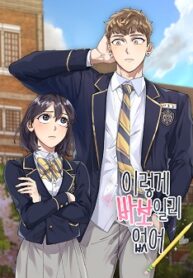 Doha happens to transfer to Gukje Island High School a school where only the rich can attend. This place is famous for its unique system where the dormitory buildings and room sizes are assigned according to ranks There, she continuously encounter Rowoon, the top celebrity who has been using the biggest VIP room for three years. Rowoon, the perfect man who has the looks, body, intelligence, and loyalty. However, the one flaw that he hides is that. he is a dating dummy who doesn't know a thing about women's psychology! At the request of Doha's twin sister, who also happens to be a fan of Rowoon, they share news using their special birthstone that lets them communicate through their thoughts. One day, Doha discovers that her sister's birthstone has fallen into Rowoon's hands, and she struggles to get it back. Finally, after regaining the birthstone back, Doha thought she would be living her dream of having a quiet high school life. However, she found out that she suddenly had nowhere to go due to the notice of being kicked out of the dormitory. Rowoon, on the other hand, realizes his shortcomings when a charming rival who has their eyes set on the VIP room appears. There, Doha and Rowoon decided to exchange what they needed from each other. Doha became Rowoon's secret dating consultant, and a full-scale cohabitation romance began.I cannot be foolish like this /