I’m a low rank adventurer, but I decided to excel in magic ~I’m going to use my [Magic Creation] and [Item Creation], which are Godly skills that were once useless, and become outmatched~ 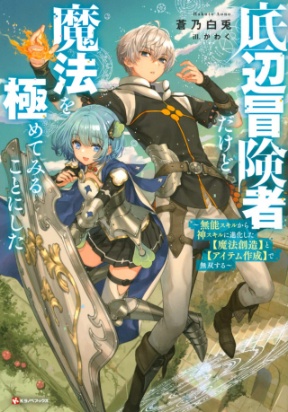 “Loa is a bottom tier adventurer who is regarded by everyone as “incompetent”. The only skill he possesses is [Create Item], which is the ability to create an item in exchange for your levels. Because of this skill, Lore is still weak for his level when compared to others. However, Loa continued to raise his level without using the [Item Creation] ability in order to improve his ability as much as possible. He has been hunting low-level monsters such as slimes and goblins for a year. When Loa finally reached Level 50, an extraordinary change happens to him. “[Item Creation] has evolved into [Magic Creation].” The [Magic Creation] skill allows you to create a new magic in exchange for levels. The more levels you sacrifice, the more powerful magic you can create. Furthermore, by using the [Item Creation] ability, you can supplement your status with powerful equipment, create high-value items, and it’s super convenient! [Item creation] and [Magic creation] ──The two skills have a synergistic effect, and Loa achieves tremendous growth.”