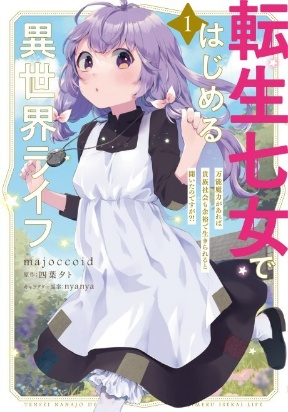 Myria Kanami's high school life was disastrous. Having an awful father, no friends, and spending her days working part-time summed up her daily routine... But one day, she gets into an accident that takes her life! However, she opens her eyes again, this time, in another world! She has been reincarnated into the body of 8 year-old Myria, the seventh daughter of a poor noble family residing in the countryside. As the thought of finally being released from the arduous high school life crossed her mind, she then dug into her new body's memories --- but, the situation was just as bad as in her old life! I'm being bullied by my older sister, the second daughter, who has had an affair and turned back in from her marriage... And my muscle-brain father is going to make me engaged?! I've reincarnated but, I have no cheat powers, nor any magical powers, what is going on?!