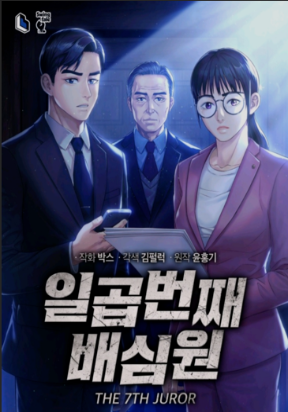 The 7th Juror is a Manga/Manhwa/Manhua in (English/Raw) language, Action series, english chapters have been translated and you can read them here. You are reading The 7th Juror chapters on ManhwaZ, fastest updating comic site. The Summary is

Ace Prosecutor Yoon Jhin Ha, with good looks and a deep voice, along with the ability to act and the ‘Hwa San Station Homeless Man Murder Case’ that was sent to him. With clear evidence, a confession from the suspect himself, and a newbie lawyer handling the case, it should’ve been a simple trial until an unseen factor comes in his way – Former President Jang Seok Joo as a potential candidate to be a juror for the trial. With his tendencies to avoid any unforeseen issues, Yoon Jhin Ha tries to prevent Jang Seok Joo from becoming a juror. However, on the jury selection day, Jang Seok Joo was selected as the last seventh juror…. and this ordinary homeless man murder case gets all the attention with the participation of the former president as a juror! Who will be the one to expose the deepest secrets.

How can a time-limited evil gain her vengeance?