The Revenge of My Youth: My Re Life with a Girl Who Was Too Much of an Angel 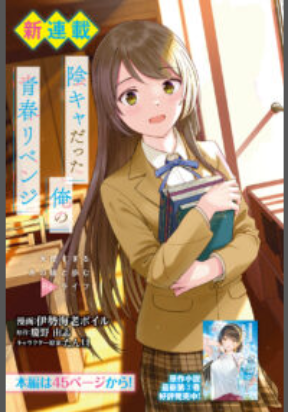 The Revenge of My Youth: My Re Life with a Girl Who Was Too Much of an Angel is a Manga/Manhwa/Manhua in (English/Raw) language, Manga series, english chapters have been translated and you can read them here. You are reading chapters on ManhwaZ fastest updating comic site. The Summary is

This is the story of Niihama Shincirou, who collapsed after being ravaged by a black company and woke up to find that he had been sent back to his second year of high school. When he wakes up, he finds himself in a time leap to his second year of high school. His high school life …… was gray and shady, but he’s sure he can start over now. The beautiful girl of his dreams, Haruka Shijouin, whom he met again over time, is even more innocent and cute than he remembered, and above all, she has been staring straight at Niihama. “I feel like you’ve changed a lot from the Niihama I knew yesterday. You’re still kind, but you’ve grown up, and that’s wonderful!” If I could change the future, I would definitely save her life after she took her own life after being severely bullied. With the adult mentality and corporate power that I’ve acquired, I’m going to take my revenge on my second youth with her–!