Until the Gal and I Become a Married Couple 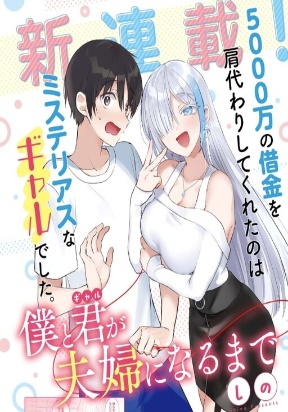 Until the Gal and I Become a Married Couple is a Manga/Manhwa/Manhua in (English/Raw) language, SUGGESTIVE series, english chapters have been translated and you can read them here. You are reading chapters on ManhwaZ fastest updating comic site. The Summary is

Saku Kanakura was a boy born into a poor household. He studied hard and managed to pass the exam to an excellent high school but, it soon turned out that his parents were in debt! When it was time to pay the debt off, a mysterious gal appeared and offered to pay off their debt. A big burden was almost off Kanakura's head, but the gal made a condition in return which stated that—