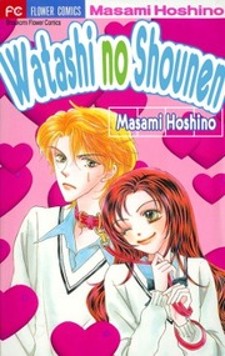 from ShoujoMagic: Consists of a collection of 4 short stories about Serena and Kazuya: 1) My Boy Possession (Watashi no Shounen) - Serena has been head-over-heels in love with her childhood friend Kacchan (Kazuya), who's one year younger than her, for 10 years!! She's been working hard this entire time to make herself the kind of woman Kacchan would like, and now she's brimming with fighting spirit! But she's so afraid he'll reject her that she hasn't made a confession yet, even to this day. She wants to be close to him, but she can't manage to do more than just joke around with him. What will become of Serena and her wish for love!? 2) I Want to Get Lovey-Dovey!! (Rabu-rabu ni Naritai!!). Serena wants a more lovey-dovey relationship with Kacchan! But will he object...?! 3) Love Is Invincible and Ultimate (Koi wa Muteki de Saikyou). There's a new teacher in school, and he's causing problems for Serena and Kacchan...?! 4) Your Girl Possession (Anata no Shoujo) - It's Christmas, and Serena is excited about the idea of being alone with Kacchan on Christmas Eve because she wants to give him all her body and soul... until her friend gets dumped by some guy because "relationships turn cold after you go all the way." Now Serena's having second thoughts...!?