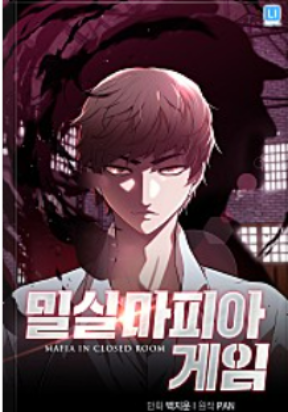 Closed Room Mafia is a Manga/Manhwa/Manhua in (English/Raw) language, ACTION series, english chapters have been translated and you can read them here. You are reading Closed Room Mafia chapters on viptoon.net, fastest updating comic site. The Summary is

High school student Kang Chul-joing awoke in an unknown locked room. He finds himself in a chaotic situation, he searched around the room and found an old MP3. What he learned from the message left on the MP3 was that he was poisoned and that he had only three hours left to live. Kang Chul-joong, who was usually a mystery quiz enthusiast, tries to escape the unknown room by finding clues based on his reasoning skills that he has accumulated over the years. However, the reality is different from the ideal. What is the last clue that he noticed when he made a series of mistakes and ended up in an urgent situation where the poison spread and he start vomiting blood?! A new survival game presented by Baek Ji-woon the creator of "Struggle" and "Undead King"! Is there any way to escape this hellish secret room!