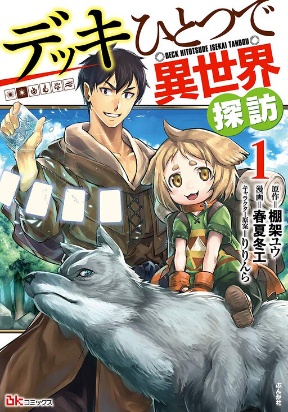 Tohru Yanagi, aka BYDE, is an obsessive gamer with a penchant for fantasy tropes. It should come as no surprise, then, that after playing his favorite VR game "Last Fantasy" for 100 hours straight, his heart gave out and he died. In the endless void after death, he met Celuenon, the god of gaming. Intrigued by his skills, Celuenon invites him to the world of Krenaklem, a land of swords and sorcery and all of those typical isekai tropes. Tohru accepts, and naturally is sent to another world. So what's the catch this time, you might ask? In lieu of giving him any skills from Last Fantasy, Tohru instead was gifted a deck from "Monster and Magic Masters" - a physical card game he used to play in the past. And just like the trading card game, as long as he has the required mana he can summon any card from his deck, ranging from monsters to his faithful wolfgirl assistant Waff. Anyway, by now you get the jist of it. If you made it to the end of this synopsis, you know exactly what you're getting into - and you've likely already committed to reading this. Don't let me stop you.