I've reincarnated as a villainess, though I became a teacher who magically punishes my students who have fallen behind! 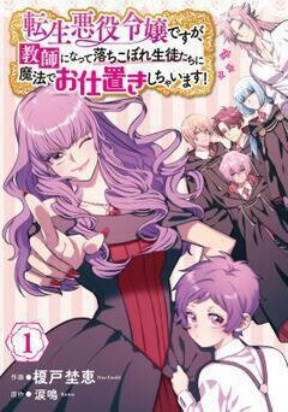 If you’re tricked by a guy and get reincarnated, would like to become a villainess? I didn’t know that have to teach at a magic academy full of problems and I even have a son?! Rokuka Shinozaki, a teacher chasing after her stealing boyfriend „ I will definitely catch him and get my stuff back!“ was pushed off a bridge and died… She was then reincarnated as the villainess ‚Rika Versin‘ I have never heard heard of a woman like her. Not only proficient in literary arts, but also martial arts. A beauty who's the best at punishments magic , a villainess lady who toyed with men only to have them- and the brilliant son who was birthed because of a mistake. In addition, the magic academy after hearing about Rika's punishments magic, was asked to be a teacher in a class full of problem children The lethargic prince, the evil son of a genius warrior, the reclusive knight of duke's son, the apprentice of royal doctor who loves women, and the youngest princes whose a sweet little devil... How will Rika "punish" these problem children with such habits?!