Love could not get shared between the twins 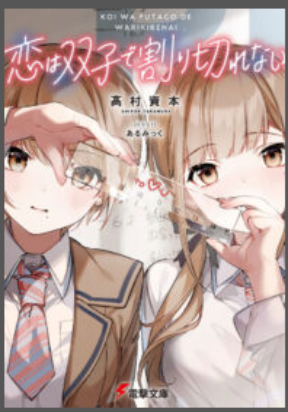 I can’t be just a childhood friend forever. A complicated Love-comedy between the first love of twins. I was six years old when my family moved in next door to the Jinguji family. From then until now, when I’m in my first year of high school, both of my parents have been close friends, and I was close friends with that twin-sisters with whom I grew up together as a single family. The older sister, Rumi, is boyish on the outside, but a maiden on the inside, and the younger sister, Naori, is cute on the outside, but a sub-culture otaku, a minefield by herself. And I, Shirasaki Jun, am not happy to be sandwiched between two beautiful sisters with contrasting personalities. Even though they have a budding crush on me from no one knows when, but since we didn’t have any specific relationship between us, we continued to interact normally, but ―― Would you like to go out with me? How about a trial relationship? ――This comment from Rumi eventually led us straight to a strange love triangle. This is the start of a love comedy about twins who are in love for the first time in their life!